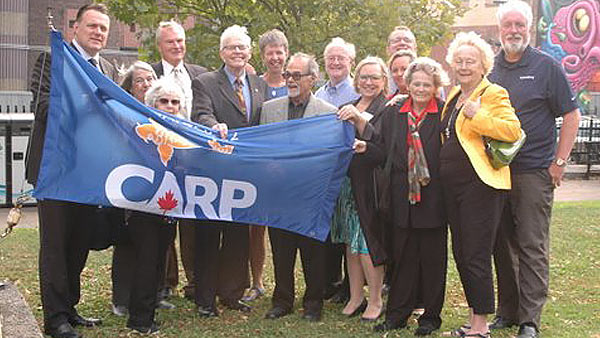 This year, National Seniors Day also marks a significant shift in Canada’s population balance. Canada’s golden generation has officially outgrown our youngest age group and, as a result, wields prime power to influence the direction and landscape of our country’s socio-political make up more than ever before. According to a new Statistics Canada report, people 65 and older outnumber kids 15 and under for the first time in Canadian history. That means the oft-used expression “back in my day” holds less water because seniors are having their day right now.

With less than 3 weeks to go until our 42nd Federal Election on October 19, 42 CARP chapters across the country raised their CARP flag today in their respective communities with locally elected representatives. ZoomerMedia Limited founder and CARP President, Moses Znaimer, hosted today’s event at Toronto’s City Hall. The flag raising signifies a nationwide call to action by CARP and Seniors Vote, a collaboration of over 50 seniors’ groups, on retirement income security, health reform, housing, and income inequality in the midst of the 2015 Federal Election campaign. Local city mayors, local elected officials, and candidates of all four federal parties have been invited to recognize the contribution of senior citizens in Canada and to heed their call for action.

“But today’s senior is not your grandparent’s senior,” Susan Eng, executive vice president of CARP, told Vancouver’s NEWS 1130. “It’s a different kind of person who carries on living and is probably still working, travelling, buying and all of those things we anticipate people quit doing at age 65.”

Zoomer voting power is nothing to be sniffed at and our political parties seem to be paying attention. New campaign promises to financially and socially bolster Canada’s senior set have recently been rolled out by all the major government contenders and CARP is keeping track of them. “We will be unpacking and comparing the promises made so far so that CARP members and older Canadians generally – among the most politically engaged voters – will have a clear picture of what the various parties are promising to do to address their priorities,” notes Eng.

There is no denying that more financial support for Canada’s aging majority is a must. We’re seeing a growing number of seniors staying in their jobs, or finding new ones, beyond retirement age. Eng says that approximately 600,000 Canadians over 65 are still in the workforce today. That translates into the fact that more than 1 out of every 10 seniors are holding down day jobs, another newly released figure from Statistics Canada.

“We have to stop thinking that once someone is 65 then they’re non-productive,” explains Eng. However, for at least 50% of those working, it’s a financial necessity to keep doing so. It’s an especially tough situation for widowed, elderly women who stayed home earlier in life to raise a family and now find themselves unable to survive without working. “They are now finding themselves in double digit rates of poverty,” Eng says.

Together with Seniors Vote, CARP has launched the “Get Out the Vote!” campaign to help encourage older Canadians to get their family members and friends to vote in this year’s Federal Election. 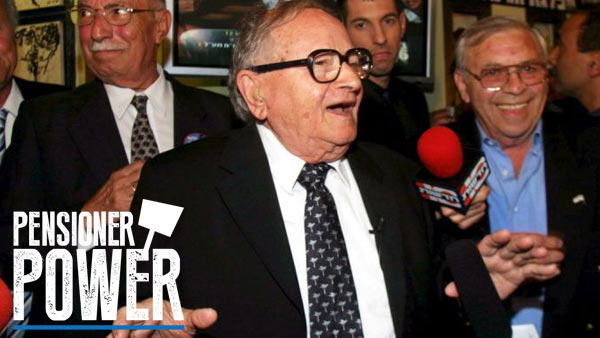 Financial security issues for seniors are not Canada-centric. VisionTV recently world premiered the eye-opening documentary, Pensioner Power, in which journalist/filmmaker Martin Himel explores the growing outcry for pension reform in democratic countries worldwide and the influence of pensioner political parties in Israel and Slovenia, as well as advocacy groups such as CARP in Canada. Capping off our weeklong celebration of seniors, Pensioner Power will be presented on Monday, Oct. 5 at 10pm ET/7 PT. For web exclusive videos and more, visit our Pensioner Power mini-site.