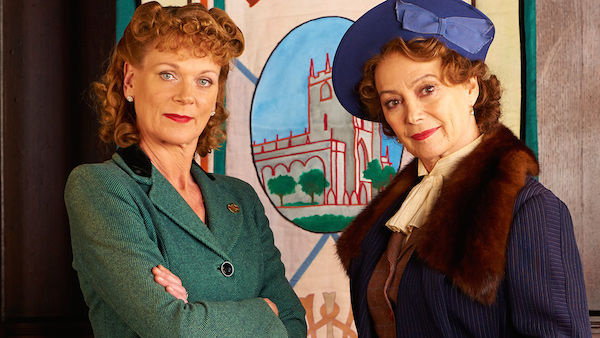 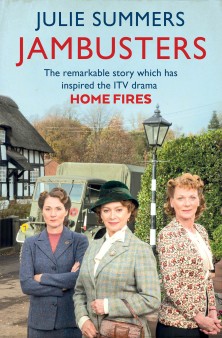 The drama series, Home Fires, written and created by Simon Block, was inspired by my non-fiction book Jambusters (Home Fires in the USA) which looked at the activity of the Women’s Institutes on the British Home Front in the Second World War. Born in Canada in 1897, the Women’s Institute movement gave a voice to country women living in often isolated communities. By the middle of the twentieth century it had matured in both Britain and Canada into an important women’s organisation which had the power and authority to lobby government and strive for better conditions for country women, while maintaining a strictly non-sectarian, non-political stance.

The idea of a group of independently-minded women working within a rural village in Britain appealed to the creative mind of the script writer and executive producers of the show. Their belief in the project has given birth to a powerful women-led drama that draws on history for its backdrop, but with a light touch, and on the imagination of Simon Block for the characters and the development of the drama.

We open the first episode of the first series in August 1939 when Britain waited breathlessly, as other allied countries, to see what Hitler’s next move would be. It was vital from the outset of the drama to emphasise the mood in the country at that time. We all now know how the Second World War ended but in August 1939 there was no certainty that there would actually be a war – just a very great fear that there might be. And it was the fear of the unknown that was so pervasive. The late summer weather was particularly beautiful that year and people could hardly match the dark rumblings from the continent with the glorious warm sunshine and rich harvest of fruits and vegetables that followed the announcement on 3rd September that Britain had declared war on Germany.

1930s rural Britain was characterised by tradition, much of it hide-bound and generations old. The village centred around the church, the various shops, the doctor’s surgery, the village pub (for the men) and, if there was one, the women’s institute. Most larger villages, such as the fictional Great Paxford, had a school and a regular bus service but contact with the world beyond the ‘big city’, in this case Chester, was limited for the majority of villagers. Yet they would have been aware of the wider world of yesteryear as a result of the devastating slaughter of the First World War. Many of the characters you meet in the first episode would have had fathers, brothers, cousins, sisters who had been involved in that dreadful conflict either in the Forces or working as nurses, in munitions or indeed on the land to keep the country fed.


Not every woman in the village would have joined the Women’s Institute. Some would have been simply too busy, others would have felt it was ‘not for them’ and in some villages little factions arose in the early years that meant not all were as welcome as the movement would have liked. Britain’s countryside was still uncomfortably traditional: those who went to church did not mix with the others who went to chapel. Political leanings also affected how people mixed and the social hierarchy was in some cases hopelessly entrenched. The Second World War shook rural Britain to its roots. The influx of over two million evacuees from the towns to the countryside at the outbreak of war brought the glaring differences between town and country living to the fore. Over the course of the so-called Phoney War, which ended with the Blitzkrieg in May 1940, some fourteen million changes of address were recorded by the Post Office. People were on the move and life began to change.

This is the backdrop to the first series of Home Fires. The historical events you see were very much part of life in the early months of the war. Although Simon Block’s characters are entirely fictitious, they share many characteristics with the real women of 1940s Britain and as such mirror rural life as it was then.

I would just like to add one little personal story to this introduction to Home Fires. When the drama was being filmed I made a visit to the set in Cheshire. Nothing could have prepared me for the thrill of seeing the black and white world that I have known for the last fifteen years through pictures, words, diaries and books come alive. The scene the team were filming was the opening sequence to the series. So no spoiler alert. Steph Farrow and her son, Little Stan, were driving a herd of shorthorn cattle into a Cheshire farmyard. Simple as that. But for me it was an emotional explosion. There were smells, so familiar from my childhood but now linked with Simon’s drama. There was noise, colour, movement, heat and energy. It was overwhelming and I admit I had tears in my eyes when I saw Steph, played by Claire Calbraith, encouraging the cows into the yard. ‘Slow as you like, Stan’, she says to her son. Slow as you like indeed. I didn’t want it to stop. And because this is television, it did not stop. There were several takes so I was happy. Everything about the set was perfect as far as I was concerned. The vegetables planted in the middle of the farmyard, the hen coop, the old car in front of the stables and lovely brown and white cows munching grass along the hedgerows and mooing as if indignant at having to do the same thing more than once. 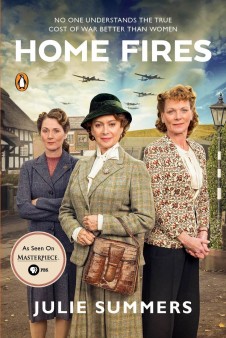 Writer, Broadcaster and Historian Julie Summers is the author of Jambusters, the inspiration for the hit ITV series, Home Fires, premiering on VisionTV Wednesdays at 9pm ET/6pm PT through March 9, 2016.

Read more from Julie here and visit her official website here. Home Fires, the book, is available for purchase here. Watch for more fascinating Home Fires backgrounders from Julie each Tuesday through March 8.