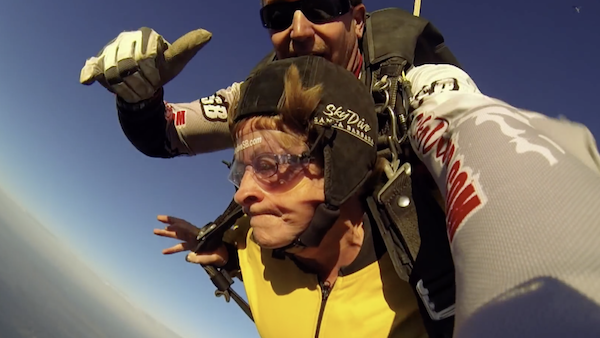 Baz Ashmawy is an adventurous soul, but deep under his adrenaline-fueled demeanour, he is definitely a mamma’s boy. As for his Mammy Nancy, she certainly loves her son, but isn’t quick to release the brake and allow her down-to-earth lifestyle to be pushed into the fast lane.

In the premiere episode of “50 Ways to Kill Your Mammy,” we quickly learn about the dynamic of Baz and Nancy’s relationship. Nancy, a single mother and retired nurse who worked tirelessly, brought up Baz and was tasked with managing the wild side of him that first emerged during his teenage years. On the surface, they appear to come from separate worlds, but beneath it all the two clearly have a huge affection for each other. If they didn’t, there’s no way Baz would’ve been able to convince Nancy to participate in a series of daredevil experiences.

First up is a trip to Las Vegas. For Nancy, this is just about as far away from her life in Dublin as she can get. The lights are bright, seedy behaviour is about and Baz is planning something to really push her boundaries: a lesson in bounty hunting.

“Is it similar to being a pirate?” Responded Nancy when Baz asked her if she knew what a bounty hunter was.

Despite her early, affable ignorance, Nancy is brought to a firing range and handed numerous guns to fire off. Her aim, as you could imagine, is pretty hit and miss. However, she does become oddly comfortable behind a shotgun – to Baz’s excitement. Even though Nancy gained more confidence behind the trigger than expected, she will not be busting down any doors of any criminals any time soon. 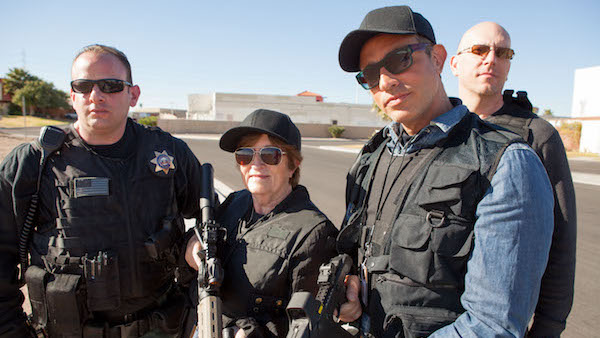 That said, Nancy’s weapons experience isn’t done quite yet. No, no: she now has to shoot Baz with a taser. Immediately, Nancy’s motherly instinct kicks in and she refuses to do this to her kid. After receiving lots of reassurance and the commitment of her supervising officer, Nancy helps deliver a wave of electricity into her son’s body. For a moment, Baz’s body comically freezes up as he drops to the ground like a cartoon character. A few moments following the strike, Baz is as good as new as Nancy tries to wrap her head around what just happened – oh, and the desire to place a bandage on the minor, pin-sized wound that the taser left on her son’s back.

Now, what all of this training leads up to is Baz and Nancy actually tagging along with the bounty hunters as they raid a scofflaw’s residence. Continually, Baz tries to get too close to the action before receiving the green light, while Nancy can’t help but use her motherly instincts to humorously ensure that her son pays attention to the professionals. Despite wearing his-and-her bulletproof vests, Nancy can’t help but fear for the safety of Baz and she.

Knowing they’re in good hands, Baz accepts an invitation to join the officers as they go into the home and bust the alleged criminal. Baz is enthralled, if not a bit overwhelmed by participating in such a life or death scenario. As the arrest comes to a close, Baz can’t help but concern himself with his mother’s safety. Like an excited, yet nervous child, Baz rushes outside to greet his mother and ensure that all is well with her. Although he was the one in real danger, Baz needed to know that his mammy was still enjoying her day.

After a few more adventures like reckless gambling in Las Vegas and stunt driving in Hollywood, Baz treats Nancy to one heck of a present for her 71st birthday. Together, Baz and Nancy will skydive from thousands of feet in the air. Unlike the previous jaunts had by the duo, this skydiving event is the one that motivated Baz to take Nancy on a multi-pronged daredevil trek around the world. 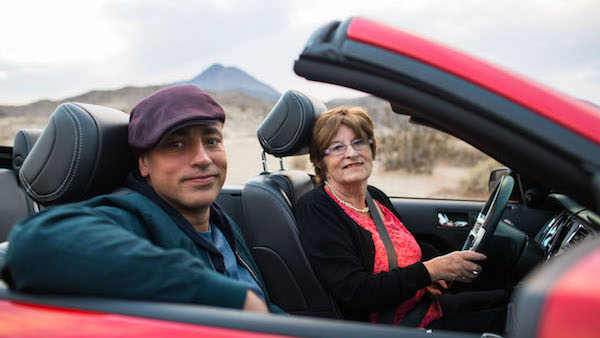 What surprises Baz pretty quickly is the lack of nerves Nancy is showing as she gets ready to leap out of a plane – she’s more nerves about the length of her skydiving pants than anything else going wrong. Meanwhile, Baz (who has done this before) is endearingly nervous. You see, having Nancy partake in this jump has made Baz take it much more serious than his previous jumps. For the first time of their trip, he seems genuinely scared about his mother’s well being. In this moment, Baz’s brashness takes a backseat to Nancy’s bravery.

In the air, Nancy remains thrilled while Baz tries to build up positive thoughts. Without hesitation, Nancy and her instructor take the plunge – again, Baz is not sure how to handle this. So, as any good son would do, he follows his mother’s lead and hops out of the plane.

To Baz’s surprise, he makes it to the ground first. Then, he sees Nancy and her guide landing amidst a plot of trees. Thinking that something is immediately wrong, Baz and the series’ crew race over to make sure everything is okay. And guess what? Nancy is ecstatic about the experience, even if her pre-jump Panini is causing an odd rumble in her stomach.

Once everything settles down, Baz surprisingly sheds tears over the experience. The weight of the moment clearly impacted him greatly and it takes him some time to make sense of it all. What is very evident, however, is how much of a bonding experience this fall-from-the-sky became.

Conceded Baz: “Today, I fell in love with my mammy more than I ever thought I could.” 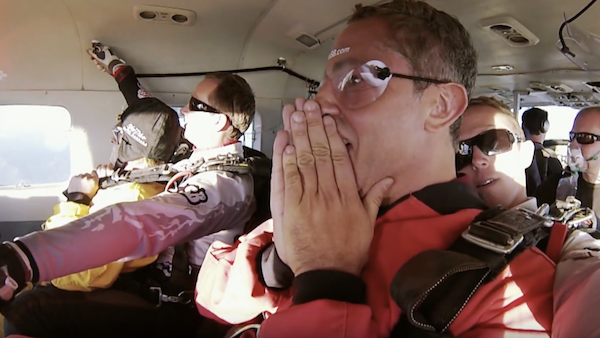 Next week on “50 Ways to Kill Your Mammy,” Baz and Nancy have a go at a rally car race in the desert; get up close and personal with snakes; and participate in an unexpected, yet good natured wrestling match.

“50 Ways to Kill Your Mammy” can be seen Mondays at 8pm ET/5pm PT on VisionTV.