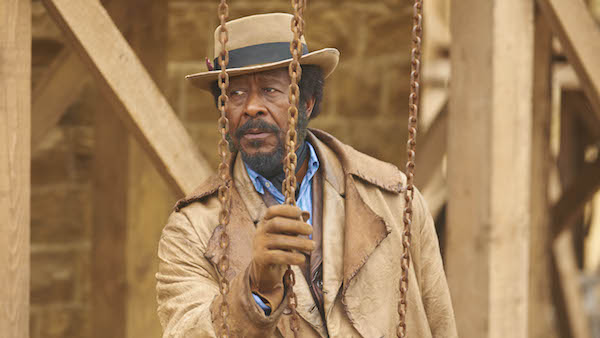 In “Jericho,” veteran actor Clarke Peters (“The Wire,” “Person of Interest,” “Notting Hill”) plays Ralph Coates, a mysterious, yet self-assured and in-control railwayman that’s left the U.S. for the British Isles.
Once settling in the shantytown of Jericho, Coates soon becomes a man of power, even though he still has that outsider vibe about him. Then again, in a community where most people are an outsider in some capacity, perhaps Coates’ presence isn’t too much of a shock to certain residents.
During a recent interview with The British Blacklist, Peters touched on the mysterious Coates character.
“We all have our stories and our history which determines our actions,” offered Peters. “The delicate balance is shaping him so that he’s not evil. To make sure he’s a rounded character and some of his actions are looked at in the context of who he is in this space, rather than having the bad guy, who just happens to be black. We do find out over a period of time…”
Jericho S1E3 – Tuesday, September 26 at 8pm ET/5pm PT: News of Johnny’s true identity spreads like wildfire throughout the town, leaving him isolated from Jericho; Coates now sees him as a rival and even Annie is keeping her distance. Charles faces financial ruin and is forced to court Sorsby, a wealthy preacher, as a potential investor. But when Annie discovers an ugly truth about Charles’ new investor and takes it upon herself to right a wrong, she finds herself embroiled in a dangerous situation.
-Adam Grant