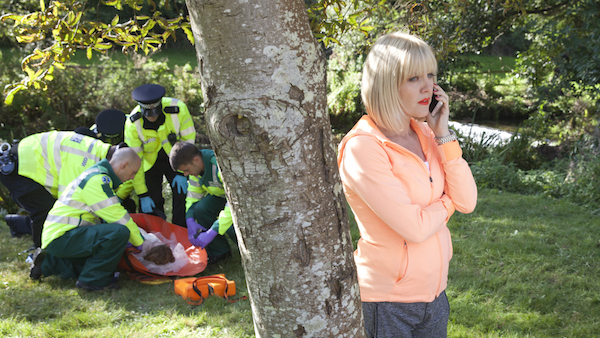 When you have an incredible, spacious estate like Sir Charles Fraith does, you surely do your best to make the most of it. As a new business venture, Charles has decided to use his property as the picturesque spot for those in Caresly to get hitched. Helping him promote this, of course, is the PR-minded Agatha.

On one particular day, a beautiful wedding appears to be coming up roses. However, it doesn’t take long for Agatha to notice that something is wrong with the bride, Kylie. Sitting alone at the table, Kylie is weeping and wondering if she’d made the right decision. Looking to keep the day at an upswing, Agatha assures Kylie that marriage is great – even if Agatha doesn’t have positive feelings about her failed union.

Throughout the reception, we are introduced to Kylie’s new husband, Zac, who can’t help but look very uncomfortable. Then, you have her supportive maid of honour Joanna and Bernie Barrington, a local businessman who – because her father was out of the picture – walked Kylie down the aisle. Throughout the festivities, Agatha is aware that something is off, but can’t put her finger on it.

By the next day, however, Agatha’s uneasy feelings are sadly validated when she joins a crowd of stunned villagers for a sight no one expects to see after a wedding: the bride dead, still in her dress, floating face up down a river. Residents are beside themselves in shock. 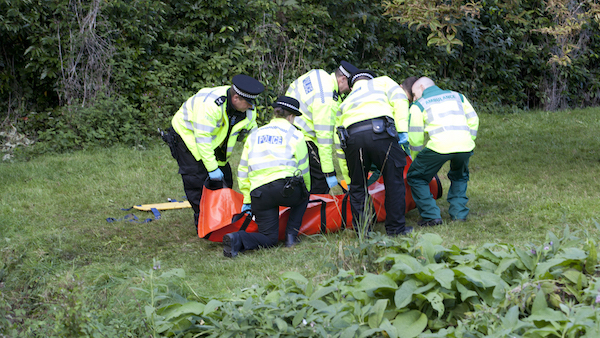 Immediately, Agatha is on the phone with Roy to discuss the matter. It’s right around this time that local authorities, DCI Wilkes and DC Bill Wong once again tell Agatha to not investigate this death. As easily as Agatha plays along, she just as easily disregards their wishes and begins to look into what happened to Kylie.

At first, Kylie’s death is viewed as a suicide, but based on the uncomfortable nature of the wedding, Agatha thinks there is more to Kylie’s passing than meets the eye. Shortly after reassuring Kylie’s mother, Freda, that she was going to find out how the young bride ended up dead, Bill informs Agatha that Kylie disappeared after the wedding and that she was in fact murdered. Not only that, but her body was placed in a deep freezer before getting placed into the river.

In Agatha’s presence during this revelation is Charles. Immediately, he is very uneasy about Agatha getting involved in Kylie’s murder. Oddly, he seems to have something to hide – but what?

Meanwhile, the presence of one of Kylie’s friends, Phyllis, on a televised news report gives Agatha an idea regarding how to extract information for the case. Phyllis seems obsessed with being on television and famous. Thus, it’s decided that Agatha, Roy and Gemma will convince Phyllis that they want to create a reality TV show and have her be a featured character on it. 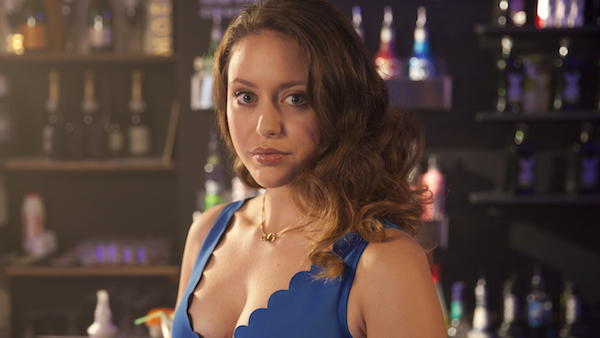 Upon meeting at Rave, a bar owned by Zac’s father Terry, Phyllis takes the bait. Joanna, however, angrily storms off once the conversation begins to point toward Kylie.

After Joanna departs, Phyllis explains that Kylie and Joanna had a bit of a heated rivalry. In fact, Joanna was once romantically involved with Zac and threatened to kill Kylie once she stole him away. Seeing that something fishy looked to be going on in his bar, Terry gives Agatha and her crew the boot.

Not ready to go home yet, Agatha tracks down Phyllis’ place and briefly spies on her from across the road. Eventually, Agatha moves toward the home, only to be knocked out cold by a blunt object to the noggin. When Agatha comes to, it’s Charles there to take her home. Unfortunately once she is outside of her place, Agatha is still very wobbly. Figuring she’s in some trouble, James races out to lend a hand.

By the next day, James is also fully engulfed in the murder case, serving as yet another member of the fake reality show team created by Agatha. Together, James and Agatha participate in a very revealing conversation with Phyllis. During their time together, it’s learned that Kylie once had an affair with Bernie, the very man who gave her away, at her wedding.

But, when Bernie wanted to end said affair, it’s alleged that Kylie blackmailed him for £15,000 to keep their dalliances a secret from his wife.When Agatha goes to Freda with this piece of information, the response isn’t positive, leading to a formal warning from Bill to stay out of the case. 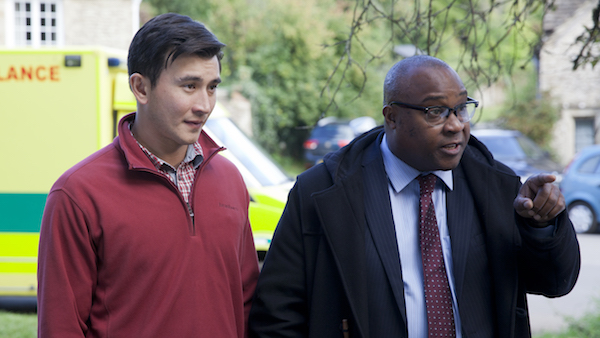 Ignoring Bill, Agatha and the team keep moving forward. With the reality TV ploy still in play, Bernie is taken to lunch by Roy and Gemma, which leads to the revelation that Kylie’s blackmail attempt didn’t work. Why? Well, Bernie’s wife knew of the affair and was okay with it. Not only that, but she supported the idea of using the £15,000 as a wedding gift for Kylie.

At Kylie’s funeral, Agatha notices Joanna in the distance wearing something very similar to that of Kylie’s wedding dress. As the two chat, it’s discovered that the dress Kylie wore at her wedding was given to her by Joanna after her secret relationship with Zac’s father, Terry, fell apart. Following this revelation, Bill and DCI Wilkes barge in and arrest Charles in connection to Kylie’s murder. In hysterics, Joanna charges over and attempts to attack him.

During the commotion, Zac insists that Agatha meet him later that night for an important conversation. Agatha obliges and arrives at the meeting spot in time. Unfortunately, Zac doesn’t show and has instead been reported missing.

After a disconcerting encounter with Terry the following day, Agatha is pulled away from her investigation by Sarah, who needs her new friend’s help managing a tea station within a local photography exhibit. While not impressed by having to do this, Agatha’s guided tour of the exhibit actually helps her crack Kylie’s case. 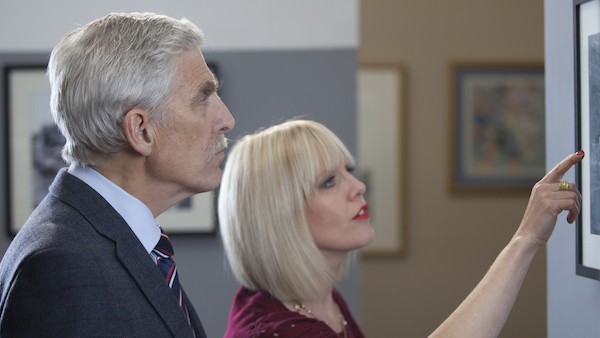 In one photo, there is Bernie Berrington’s office building, right beside the Fields butcher shop. Figuring a butcher shop would definitely house a giant freezer, Agatha races over to it.

Once on the scene, Agatha breaks into the building only to discover a very grizzly looking giant freezer. She reluctantly opens the lid and discovers Zac – dead and frozen. This startling discovery is quickly followed by Joanna menacingly entering the room, getting ready to show off the butcher skills she learned from her father…on Agatha.

Instead of attacking Agatha right away, Joanna explains that Kylie always stole everything from her, especially Zac, as he continued being intimate with her while closing in on his wedding. After the wedding, Kylie and Joanna got into it and Zac attempted to intervene. As this happened, Kylie seriously knocked her head. Instead of going to the police for assistance, Joanna opted to freeze the body, put the dress back on it and send Kylie into the river. Clearly, Zac fell victim to a conflicted, if not guilty, conscience more than once.

Before Agatha has a chance to totally process everything, Joanna violently comes at her with a knife. Just as Agatha looks like her fate is about to be sealed, James, local police and villagers burst in and thwart Joanna. It’s yet another narrow escape for Agatha.

So then, what about Charles – why was he acting so strange? Turns out, Kylie successfully blackmailed him over a brief affair they had together. Really, he just paid to keep her quiet and was understandably nervous that such information could unlawfully connect him to Kylie’s murder.

As for Agatha, she continues to help bring murderers to justice, but still can’t find a way to get on the same romantic page as James. While crimes bring them together, they have a hard time staying that way once the dust settles. 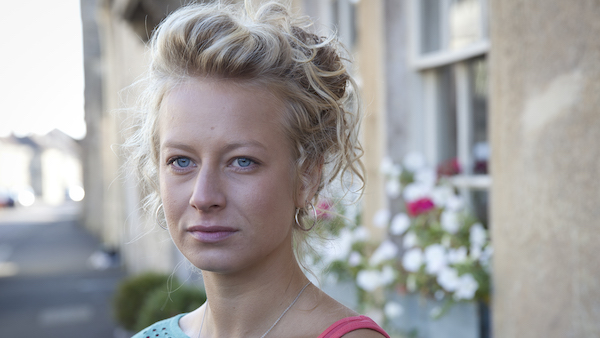