Watch Victoria and Win Your Way to the UK 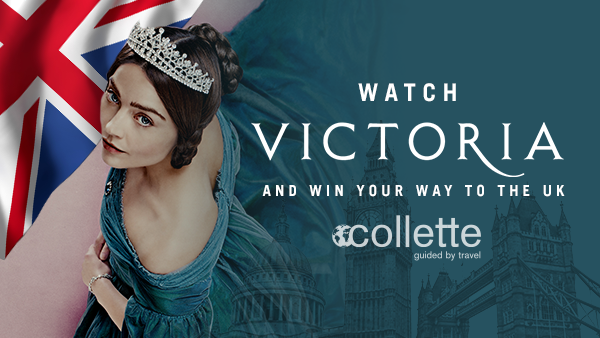 Tuesdays at 8pm ET from April 4 to May 23, royal romance and intrigue will reign supreme on VisionTV with our premiere presentation of the huge period drama hit, Victoria.

Jenna Coleman and Rufus Sewell star in this ambitious, richly told 8-part series that tells the story of the early life of Queen Victoria, from her ascension to the throne of England at the young age of 18, through her struggles to find and assert her power, to discovering love, passion and marrying Prince Albert.

To celebrate this crowning achievement in British drama, we’ve partnered with our friends at Collette Tours, guided by travel, to bring you the chance to watch Victoria and win an amazing, 10-day tour of England, Scotland and Wales filled with sights and experiences fit for royalty. Our Grand Prize Winner and a friend will be savouring the scenic wonders of Britain on the British Landscapes Tour traveling from London through York, Edinburgh, the Lake District, Wales, Stratford, the Cotswolds, Stonehenge and back to London. Discover more…

All you’ll need to do to enter is to watch Victoria each Tuesday at 8pm ET/5 PT from April 4 to May 23 and come back here after the show to answer a Royal Question about each weekly episode.

WATCH THE TRAILER FOR ‘VICTORIA’