94-Year-Old Woman Runs Her Way into the Record Books 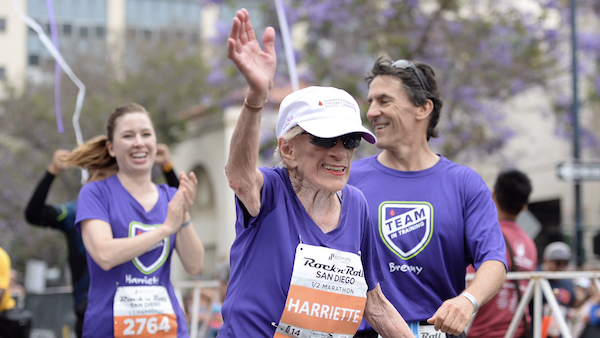 It is widely believed that running is the most beneficial physical activity you can participate in. One woman who truly understands this is 94-year-old South Carolinian, Harriette Thompson.

On Sunday, June 4 at the San Diego Rock ‘N’ Roll half marathon, Thompson – who has overcome cancer twice – became the oldest person to ever complete a half marathon. Thompson ran the 21.1KM route in an unofficial time of three hours 42 minutes and 56 seconds.

“I’m sort of numb. It feels great. I just am so happy that I was able to do it,” said Thompson while conversing with reporters after the race.

Thompson started running at the age of 76 and has been racing down the streets of San Diego for more than 17 years. When she was 92, Thompson became the oldest person to run a full marathon (42.195KM). This time around, Thompson ran the shorter marathon due to a leg operation she had in July 2016.

“I was warned, my children would say ‘watch out, here’s another pothole,’ so I was able to get over those,” relayed Thompson.

While setting such a record is a momentous physical feat worth bragging about, Thompson is most pleased about the money her marathon running has made for charity.

“I want to thank everybody who was so generous and gave me money,” mentioned Thompson in an interview with ABC News. “I made quite a bit this year for leukemia and lymphoma, and that’s the whole reason I’m running.”