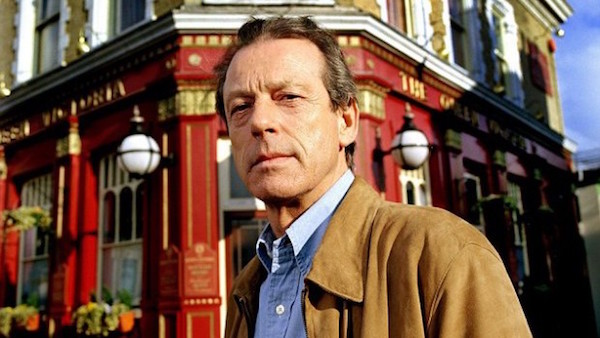 Leslie Grantham, the actor who starred on “EastEnders” as ‘Dirty’ Den Watts, has passed away today (Friday, June 15) at the age of 71. An official cause of death hasn’t been offered.
Grantham most notably delivered the first line on “EastEnders” (“Ah, it stinks in here, doesn’t it?”) when the soon-to-be-iconic soap premiered in 1985.
Grantham’s initial run on “EastEnders” lasted from 1985 to 1989. He would return in 2003 for another two years. In all, Grantham appeared as ‘Dirty’ Den in 333 episodes.
Throughout his 35+-year career, Grantham also starred in a broad collection of TV series, TV movies, as well as multiple mini-series.
“Everyone at EastEnders is deeply saddened to hear that Leslie has passed away,” commented EastEnders Executive Consultant, John Yorke. “We extend our deepest sympathies and condolences to his family and friends at this extremely difficult time.”

Added Anita Dobson (pictured above), the actress who would play Den’s first wife, Angie: “I loved working with Leslie and I will never forget our time together on ‘EastEnders.’ “There was always that look about him that you didn’t know what he was going to do next. That was his ace in the hole.”
Tributes from several people intimately involved with “EastEnders” have taken to social media to express their condolences. You can read their thoughts below.
-Adam Grant

EastEnders actor Leslie Grantham, best known as rogue “Dirty Den” in the BBC One soap, has died aged 71. Sad news. He was a lovely guy who I adored working with for 3 years. He was also a great supporter against Section 28.

Really sorry to hear about Leslie Grantham. A very very good actor and one who created an iconic character with Dirty Den #RIPLeslieG

RIP Mr Grantham…. No mean feat to get 30 million watching you on Xmas day, an EastEnders icon. X

“He never failed to make me laugh and I will remember him with love, affection and gratitude forever. See you up there Leslie! Thank you for everything. Love and respect always, Tish. X” 2/2

“Those iconic Christmas episodes were legendary and they will always be part of EastEnders history. My heart goes out to his loved ones.” 2/2

Statement from Perry Fenwick on the passing of Leslie Grantham: “I’m so sad to hear of Leslie’s passing. He really was and always will be an EastEnders legend”