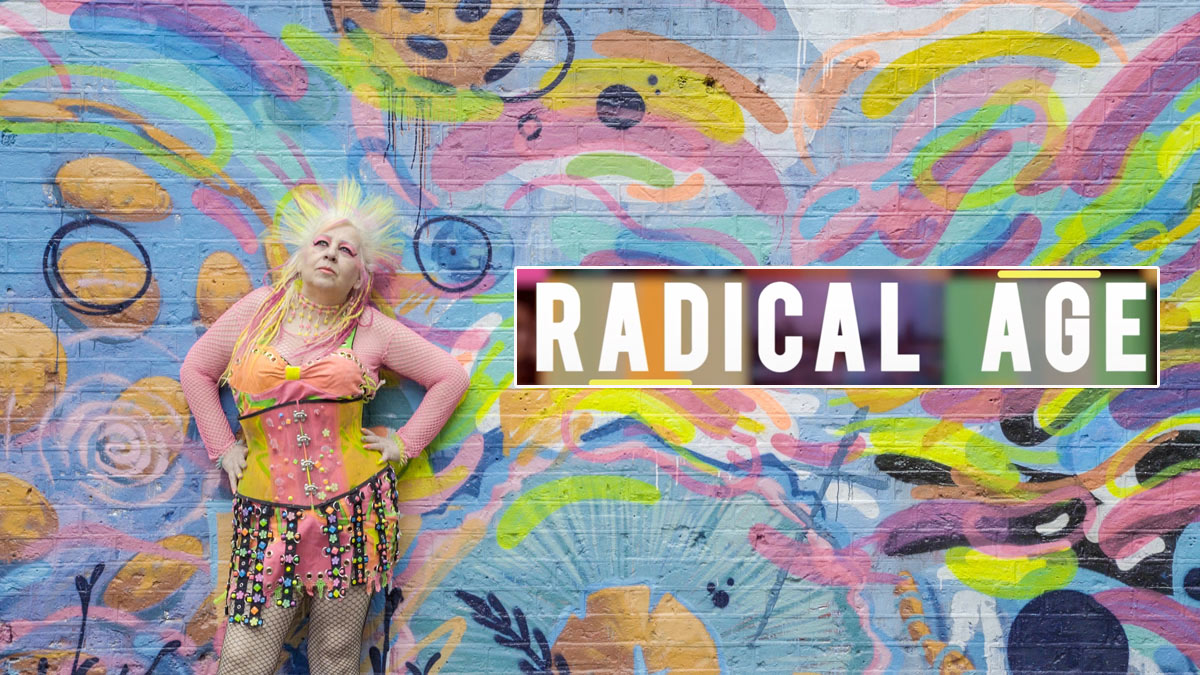 If you’ve ever experienced ageism, you’ve come face to face with the limiting expectations our society has for people over a certain age. As our individual goals and passions dictate the way we spend our golden years, it’s essential to remember that one size does not fit all. In the new world premiere documentary feature Radical Age, we meet a septuagenarian skateboarder, the world’s oldest female mixed martial arts fighter, a tattoo enthusiast in her eighties, the world’s oldest working drag queen, a purposeful punk rocker, and a B-Boy dance expert who all teach us that life doesn’t stop, and shouldn’t stop, at any age.
Premiering New Year’s Day at 9pm ET/6pm PT on VisionTV, Radical Age, produced by Canada’s Tell Tale Productions and written/directed by Jackie Torrens, profiles these six provocative trailblazers in a series of authentic portraits of later life reinvention and rebirth.
“Old age ain’t for sissies, Bette Davis famously said. That’s what I discovered during my time with Zillah, Gypsy, Ann, Neal, Helen and Stephen”, says Torrens. “Whether I was chasing an 85-year-old performer down a parade route, stepping into the fight cage with a 70-year-old or watching a 60-year-old land a frontside boardslide, I had to run hard to keep up with a group of people who have decided to never stop learning, creating, being open, moving, and living.”
These awesome age-defiers show us their inner worlds and how they’ve subverted expectations by forging identity through youthful subcultures. The documentary explores the hardship, discrimination, and relentless passion that has kept them pushing the boundaries of age and convention.
Let’s meet the six trailblazers of Radical Age.
Neal Unger – Age 58

Neal “The Dude” Unger has an internet following as the oldest, coolest skater you’ll ever meet. Neal was once depressed and suicidal but now finds solace in skateboarding, claiming that it saved his life. He now teaches young kids about “the joy of falling” and the importance of continuous improvement, no matter how long it takes.
“As you get older, people think that they need to take it easy. My first thought is, wow that’s kind of dangerous. I don’t think it’s safe to get relaxed and get comfortable.”
Ann Perez de Tejada – Age 70

Ann Perez de Tejada practices Mixed Martial Arts and has 4 black belts. She found MMA at the age of 53 and slowly built up the strength and skill to fight in her first official cage match. After dealing with a coach who wouldn’t take her seriously and blowback from the public, Ann has found a supportive community of trainers and friends who regard her as any other capable adult.
“Ageism has been the toughest opponent and still is. There’s such a tremendous deep prejudice against women who are older and who are assertive or who are still competent or who are trying to do things that people think they shouldn’t do. But there’s a confidence that comes from age too, where you start to know yourself and know what you can do and what you can’t do. At this point, I just do it anyway and they can think whatever they want to think.”
Helen Lambin – Age 84

Helen Lambin is sweet, kind, and heavily tattooed; a rare sight at her age. Helen lost her husband when she was 62 and suffered a loss of identity for subsequent years. On her 75th birthday, she decided to do something drastically permanent. She got her first tattoo and hasn’t looked back since.
“I enjoy talking to people. A lot of older people never talk to anybody. People aren’t talking to them, many of their friends have passed on, their family members. If I get on the bus, I’m walking down the street or I’m in a park, now someone has to comment about the ink. Might go into where they’re from, where they’re going, what they’re doing, so it goes beyond the ink. It goes into a real conversation between two people. So this made being an older lady a totally different experience.”
James “Gypsy” Haake – Age 86

Known on stage as the world famous Gypsy, James Haake has had an illustrious career in entertainment. He’s worked as a touring dancer, a Hollywood actor, and a drag queen for the past four decades. James describes himself as a man in a dress who takes the audience on a journey. His undying love for the spotlight silences the inevitable hate, and he refuses to let anyone stop him from shining.
“I find people that seem to me way older than they are is because they don’t have a purpose. You can sit in a window and watch the passing parade; I just want to be part of it. And you can’t be part of a parade if you don’t participate.”
Zillah Minx – Age 56

Zillah Minx has been punk-rocking since she was 15 years old and doesn’t plan on quitting. Her band “Rubella Ballet” continues to play local gigs and draw crowds of like-minded people. Beyond the music and aesthetic, Zillah’s punk identity represents a lifelong dedication to social equality and rebellion against systems of oppression.
“Being different does mean that you get a lot of attention. I’m happy and confident in the way I look. Unless you believe in who you are, you just wouldn’t be able to take the abuse or the looks or the attention or any of it. You’ve got to be able to be who you are and back it up.”
Stephen Leafloor – Age 58

Stephen “Buddha” Leafloor is a B-boy dancer who co-founded the Canadian Floor Masters in 1983. He fell into hip-hop as a way to channel his teenage anger and has since earned a master’s degree in social work to use his skills for positive change. His outreach program BluePrintForLife supports disenfranchised communities through the healing power of hip-hop.
“My hip-hop for the future is one where we pay more attention to this mentorship thing. As we get older, we start thinking about why the hell am I here and how much time do I have left and how am I gonna best do something with that. If something was a gift to you, how are you gonna pay that gift forward?”
The two-hour, feature length edition of Radical Age premieres January 1 at 9pm ET/6pm PT on VisionTV followed by encore, 1-hour presentations on Mondays, Jan. 28 and Feb. 4, 2019 at 9pm ET/6pm PT.
WATCH THE TRAILER